Max Hallecker was born in Graz, Austria and studied piano at the Music Academy of Vienna under Professor Grete Hinterhofer acquiring his diploma as a piano soloist in 1950. Having graduated, he attended postgraduate classes (Meisterklasse) with the acclaimed professors Edith Farnardi and Hauser. He simultaneously had a close collaboration as Korrepetitor with the State Opera of Graz under conductor Miltiadis Karydis. In 1952 he was engaged as professor of piano in the soloist class (Konzert- Klasse) at the State Conservatory of Graz.

At a young age he commenced his considerable career as a piano soloist with appearances on radio and television in countries of Europe and the Middle East, giving recitals and participating in chamber music concerts with renowned soloists Odnoposoff, Erduran, Schneiderhan, Orloff, Sadlo, Barbara Troxsel, Rita Streich, et al.

In the years 1955-1959 he gave many concerts featuring music for two pianos with the Austrian pianists Haidmayer, Schwenzer and Walter Klein. 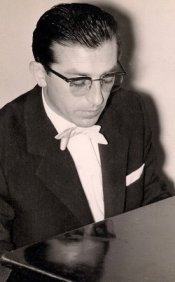 With the world famous pianist Friedrich Gulda he shared a bond of personal friendship marked by mutual esteem and exchange of views on piano technique. In 1970 he established with his family in Athens. In piano recitals and in recordings at the Greek Radio and Television he particularly stresses the promotion of Greek composers. In Greece he may claim a rich pedagogical oeuvre heightened by the successes achieved by his students in international competitions where they have been placed highly and earned prizes and in entering various music academies of Europe (Vienna, Paris, London) and Russia.

In 1996 and 1997, students of his participated in the piano competition sponsored by the IKY (Institute of State Scholarships) where they came first and won scholarships for advanced studies abroad.

The solid education imparted to his students was instrumental in their appearing as soloists with the state orchestras of Athens and Thessaloniki. In 30 years of his collaboration with major conservatories of Athens, he granted numerous piano diplomas and certificates which had high marks.

He was a regular member of juries in Pan-Hellenic and international competitions as well as in the competition held every two years by the Gina Bachauer Music Foundation which aspires to the advancement and further education of talented Greek musicians.